As an experienced appellate attorney, I represent clients in both criminal and civil appeals in state and federal court. My criminal appellate work includes both direct and collateral appeals (habeas corpus), and my civil appellate work focuses on employment matters. Because I maintain both an active trial and appellate practice, I am able to provide you with continuous representation from the first court appearance through any appeals, and can ensure that your case is properly litigated to preserve appellate issues. I also regularly contribute friend-of-the-court (amicus) briefs on civil and criminal appellate matters.

On numerous occasions, I have helped clients get their charges reduced or dismissed altogether. My legal work has helped persuade the Commonwealth to “nolle prosse” (drop) charges against my clients. Successes include:

I fight for employees who oppose unlawful employment practices, such as discrimination (based on race, gender, disability, pregnancy, caregiver status, national origin, or age), sexual harassment, retaliation, hostile work environment, wrongful discharge, and violations of the Family Medical Leave Act (FMLA). I also represent whistleblowers who face retaliation for raising concerns about unlawful conduct by employees. I represent workers in state and federal courts, arbitration proceedings, and before state and federal agencies, including the Massachusetts Commission Against Discrimination (MCAD) and the Equal Employment Opportunity Commission (EEOC). Client successes include:

I also help individuals to address workplace problems, and review and negotiate executive contracts and separation or severance agreements.

Before becoming a lawyer, I taught fourth grade for three years in Compton, California, as a member of Teach for America.

I became a lawyer because I want to help people fight injustice by protecting their fundamental rights. I enjoy figuring out answers to difficult questions and want to make a positive impact on our society by helping to shape how the law is interpreted.

Clerkships
News
More»
Contact Us
Fill out the contact form or call us at 617-742-6020 to schedule your consultation.
Accolades 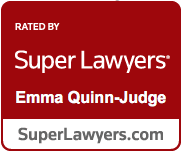