My litigation practice focuses on criminal defense, employment, and Title IX matters. I handle complicated and highly contested cases from the initial stages of investigation and discovery through trial and appeals. As your advocate, I will work tirelessly to protect your rights and achieve the best results for you.

With a broad criminal defense practice that includes trial and appellate matters in both state and federal courts, I help individuals facing a full range of misdemeanor and felony charges. I represent people accused of murder, rape and sexual assault, drug possession and conspiracy, money laundering, obstruction of justice, bribery of a public official, tax fraud and other white-collar crimes, and handle foreign extraditions. My goal is always to achieve the best outcome for you by getting the charges reduced or dismissed altogether. As a federal Criminal Justice Act (CJA) panel member, I also represent indigent federal defendants in the Boston federal district courts.

With a long history of success, examples of how I have helped my clients include:

In my civil practice, I advocate for employees whose rights have been violated in the workplace in matters involving discrimination, sexual harassment, retaliation, FMLA, wage and hour laws, and whistleblower protection laws. In addition to providing counsel, when necessary, I will litigate for you in state and federal courts, and before the Massachusetts Commission Against Discrimination (MCAD) and the U.S. Equal Employment Opportunity Commission (EEOC).

I also review executive contracts and negotiate separation or severance agreements, including advising on complex issues such as non-compete provisions, trade secrets, and stock option transfers. Executives and professionals from all walks of life turn to me for assistance, including in the finance, law, higher education, government, marketing/advertising, healthcare, and biotech industries. Additionally, physicians, nurses, physical therapists, and other licensed professionals often ask me to represent them in licensing board proceedings and hearings.

My creative legal thinking and aggressive approach have resulted in substantial verdicts and settlements, such as the following:

Applying my strong litigation skills, I also handle a variety of other civil matters, such as representing both individuals and corporations in a wide range of business disputes.

I am passionate about helping students at colleges and universities around the country resolve disciplinary actions related to academic misconduct, sexual assault, and sexual harassment. With my counsel, both complainants and respondents have successfully navigated the often-confusing disciplinary procedures at their institutions, including Title IX investigations and hearings. Examples of recent victories include:

Prior to joining Zalkind, I was an associate at the firm Neufeld, Scheck & Brustin, LLP, where I helped secure significant verdicts and settlements for victims of wrongful convictions and police misconduct in civil rights actions filed in federal and state courts around the country. Prior to that, I interned at several civil rights and indigent defender organizations, including the Asian American Legal Defense & Education Fund, Neighborhood Defender Services of Harlem, and the NAACP Legal Defense & Educational Fund. Before becoming a lawyer, I was an associate consultant in Bain & Company’s Boston and New York offices.

I became a lawyer after observing the discrimination faced by the South Asian community in New York after the 9/11 terror attacks. I developed my passion for law while working to defend and advocate for people who faced serious injustices that resulted in unfair criminal convictions or other losses of their civil liberties. I have learned through those experiences that empathy, creativity, and hard work can lead to positive outcomes for my clients. 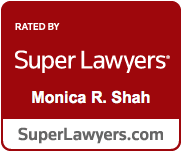