My practice is dedicated to protecting the rights of students, faculty, and employees. I represent students at all levels of education from elementary to graduate school who experience discrimination or are involved in disciplinary proceedings. In my employment practice, I counsel and represent employees in negotiations, administrative proceedings, and litigation against their employers.

With a national reputation in Title IX law, I represent students, staff, and professors who are either accused or have been the victim of sexual assault and sexual harassment on campus. My experience in both higher education and employment law makes me uniquely suited to assist college and university graduate students, faculty, and staff who may be entitled to protection under both employment and education laws addressing discrimination.

Combining creative legal thinking with a deep understanding of sexual harassment law and sexual assault issues, I will serve as your fearless advocate. I have counseled students making complaints of sexual assault and guided them through their school’s complaint process, and have litigated Title IX claims on behalf of students who were subjected to hostile environments or deprived of access to their education because of sexual harassment or discrimination.

I have worked with numerous students accused of misconduct and served as their advisor in university disciplinary proceedings. In many instances, my clients have been found innocent of the charges against them. I have negotiated resolutions to complaints that protect my clients’ academic records, and, when necessary, have taken my clients’ claims to court.

Employment and Other Civil Rights

Applying my knowledge of discrimination issues to my employment practice, I represent individuals who face discrimination and retaliation in the workplace based on their race, age, gender, disability, or sexual orientation. I frequently represent university employees, including professors, staff, and graduate students, and help them assert their rights under both employment and education laws. I have helped numerous clients negotiate separation from their employers and obtain favorable severance packages. I routinely litigate employment cases at the Massachusetts Commission Against Discrimination (MCAD), and in state and federal court. In addition to employment cases, I also represent clients in complex civil matters.

I also handle appeals to the Massachusetts and federal appellate courts, and write amicus briefs on issues relating to my practice.

Prior to joining Zalkind, I was a Skadden Fellow and a staff attorney with the New York Civil Liberties Union (NYCLU). In this role, I represented one of the first students in the country alleging discrimination by his school in violation of Title IX for ignoring his complaints of harassment by other students based on a failure to conform to gender stereotypes. I helped this client secure a settlement wherein the school district not only compensated the student but agreed to overhaul its policies and practices for preventing and addressing harassment of students. I also represented New York City public school students in a class-action suit challenging police practices in the schools.

My desire for a career that helped advance gender equity led me to law school, where I worked in women’s rights organizations and legal clinics that focused on women’s rights in the U.S. and abroad. Through my work at the NYCLU on dating violence, sexual harassment, and school-to-prison pipeline issues in New York high schools, I developed a passion for student rights and learned how my individual clients’ cases fit in to bigger picture legal advocacy. Those experiences taught me how to use my deep understanding of anti-discrimination, Title IX, and student rights law to create legal strategies that achieve my clients’ goals. 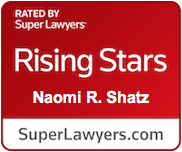