I am passionate about legal analysis and defending individuals facing difficult circumstances. I have extensive experience wrestling with the thorny legal questions that can often decide the outcome of the case, and represent clients in employment, criminal, and civil cases.

For individuals and groups who speak English as a second language, Spanish-speaking lawyers are essential for representation in legal matters. As a bilingual lawyer, I am ready to assist you in both English and Spanish.

I have a varied civil litigation practice in both state and federal courts, spanning the United States Supreme Court, First Circuit, Second Circuit, Third Circuit, D.C. Circuit, and New York Appellate Division among others. I tackle cutting-edge issues, including complex questions regarding Massachusetts’ Anti-SLAPP statute and the Massachusetts Civil Rights Act. I have authored amicus briefs for civil rights groups and legal academics, including on behalf of administrative law professors arguing for respect for federalism in Chevron cases.

I have worked on some of the most significant legal issues of our time and managed a broad civil and criminal docket. Some of the highlights include:

My litigation skills, combined with a passion for advocacy, enable me to achieve positive results for clients in a wide array of employment matters, including before the Massachusetts Commission Against Discrimination (MCAD), and in state and federal courts. I also have experience with arbitration proceedings, as well as with fighting mandatory arbitration. I have successfully defended employees in both non-compete and trade secret cases, and have negotiated large awards for clients, including in cases with novel legal questions. I also have experience fighting non-compete agreements and other covenants that restrict employee mobility.

I bring the same skills and passion to my criminal defense practice. I represent clients in state and federal courts in matters including property crimes, drug charges, and assault cases. In one recent case, I convinced a court to dismiss the criminal charges against my client before motion practice had even begun.

Prior to joining the firm, I was a John J. Gibbons Fellow in Public Interest & Constitutional Law at Gibbons P.C. in New Jersey. Before that, I clerked for three years on the federal district court and federal appeals court. Prior to those clerkships, my work focused primarily on immigrants’ rights.

As a Yale Public Interest Fellow at the Bronx Defenders, I was responsible for advising immigrant clients on plea offers in criminal cases, challenging unlawful detainers, and representing clients in removal proceedings. During law school, I was part of a team that represented a group of immigrants who were unlawfully detained after a warrantless early morning sweep of their neighborhood. The suit ended in what was at the time the largest monetary settlement ever paid by the United States in a suit over residential immigration raids, and the first to include both compensation and immigration relief. I also worked extensively on voting rights and voter protection issues, including as a researcher and organizer at the Brennan Center for Justice.

Professional Activities Accolades Why I Became a Lawyer

I became a lawyer because I care about people. I want every client to have an advocate who combines rigorous analysis of the legal issues they confront with understanding about how hard litigation can be for the people involved. In my practice, I do not shy away from challenges or powerful opponents, and always use my client’s goals as my compass for navigating through any dispute.

Clerkships
News
More»
Contact Us
Fill out the contact form or call us at 617-742-6020 to schedule your consultation.
Accolades 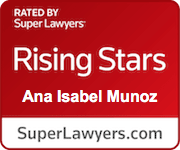